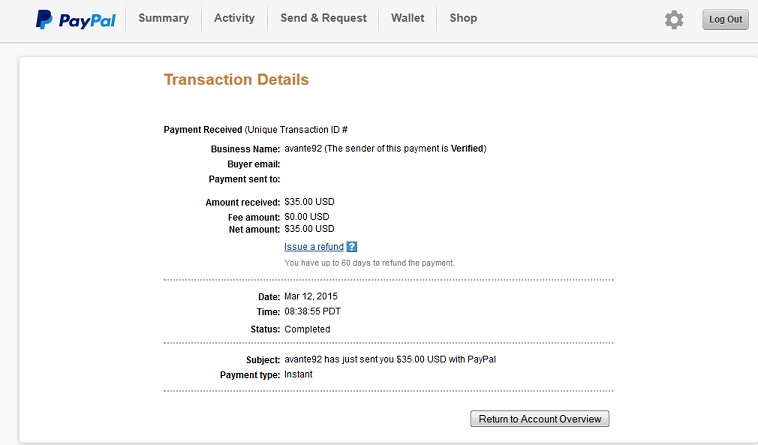 This is the first time I've been burnt by an artist and my first beware.  I really really don't want to have to post this, but I feel there is no choice left in the matter 6 months after being promised a refund that never came.  TL:DR version is I paid for art, artist cancelled 3 months later, another two months went by with me trying to get my refund before they cut off contact.  Now I'm posting this because, well, what else can I do?


WHAT: Basic digital art, $35 commission.  Was to be a picture of one of my characters and a person who is dear to me.  I of course had the permission of said person to get them included in this art.

WHEN: I made the request in July 2014.  At first the person contacted me, they were not comfortable drawing one of the characters as a plush, so I said it was ok to make them both normal furs.  Months passed and in September 2014, I was contacted to say due to circumstances out of their control, they had to cancel my commission (and implied I wasn't the only one).  I was promised a full refund that would be coming "soon".  I'm sure you all can guess how it went from there.

So I give the my info and pay my $35.  Their acceptance is below:

And my proof of payment: 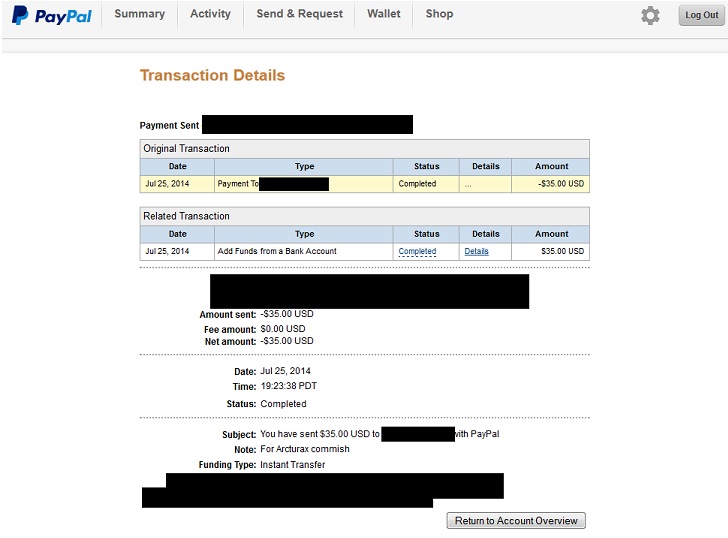 ... and then in September.. cancellation.  And then the excuses start.
I was pretty easy going about this given how long I waited to keep reaching out about it. 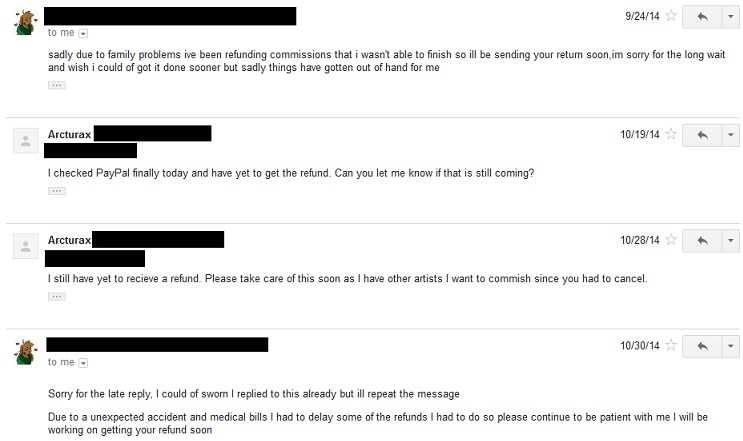 Ok, so they are having trouble, but I'm starting to lose patience quickly.  Its $35, not a whopping amount really.  Most people spend that on a gas every week or two.  Also there is the whole thing where an artist should not make their problems their customers problems.  If it means asking your friends for loans, thats fine, its at least being up front and most artists I've seen who have this problem do just that.  But jerking around your customers to get a free loan?  That is just bad :/

EXPLAIN:
Pretty much explained it all above in the sceenies.  I've seen this person finish many commissions, but I have to wonder how many people also never got art.

If you see this person open, and their art is really quite good, I would steer clear because this person cannot be trusted with your money and there is no telling how many other people have been victimized.  In the future I will now be paying via paypal using a credit card and having a 6 month limit on waiting so I can do a chargeback if things go south or they don't make the deadline.  Sadly bank transfers don't have much more than 90 days of being able to charge back and by the time they cancelled on me, it was already too late to get my money that way.  I really hate to adopt such a policy, but its people like this that make it necessary :/

Oh and I'll also add, I don't know if FA will suspend people who do this crap, but I put in a ticket asking and in true FA style it was never gotten to by an Admin.