I'm a bit hesisitant posting this, as I technically did receive some type of art [although it was not what I wanted], but this artist's rather shady practice has convinced me to do so.

WHERE:
• FA Account: http://www.furaffinity.net/user/homecomin/
WHAT: Digital Art
• I commissioned a Digital Fullybody $20 two-character drawing from Homecomin.
WHEN: August 26th - Ongoing
PROOF/EXPLAINATION:
• August 26th I inquired about the FullBody Couple commission and paid on the same day. [I Think FA's Timestamps are messed up, as they are not consistent with the Payment date on my Paypal receipt].

She accepts this Commission. 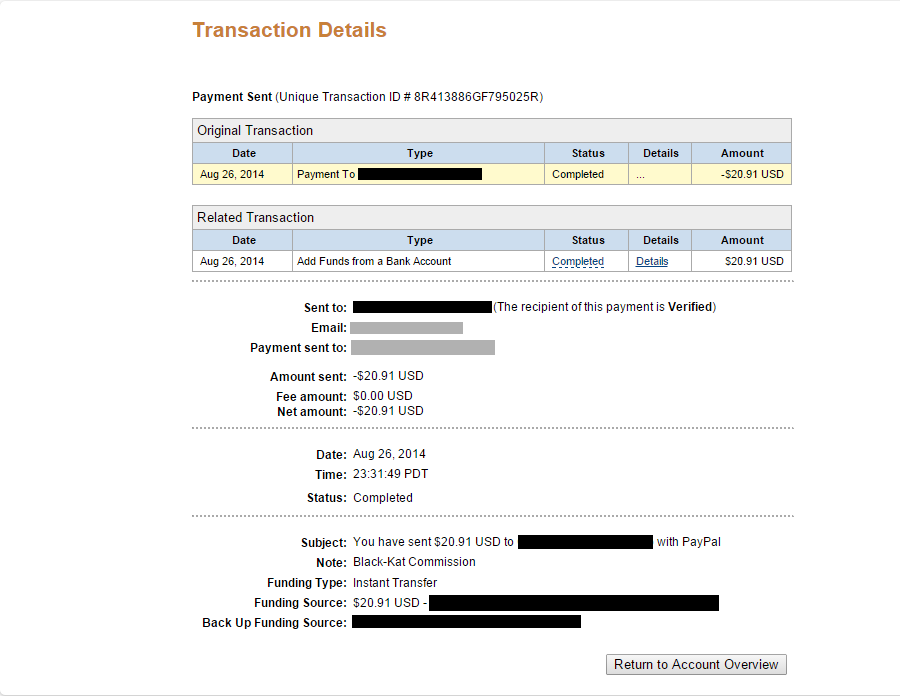 • September 9th Homecomin made a journal stating that the FA note system was "glitching" up and that she "technically sent out everybody their commission piece out weeks ago (most weeks, some a few days ago)" and that everyone who did not receive thier commission should e-mail them [I wasn't able to snap a screen shot of this but, later thier e-mail was edited out and replaced it with "note me".]

I hadn't received anything so I figured this journal applied to me as well and that I should note them.

However, it was not quite what I was expecting in quality nor portion-wise? [For lack of a better term]..

I commissioned a two character-fullbody that was advertised as everything being detailed with this picture as the example, but the piece I received had the characters cropped to around the knee/thigh with little to no detailing. 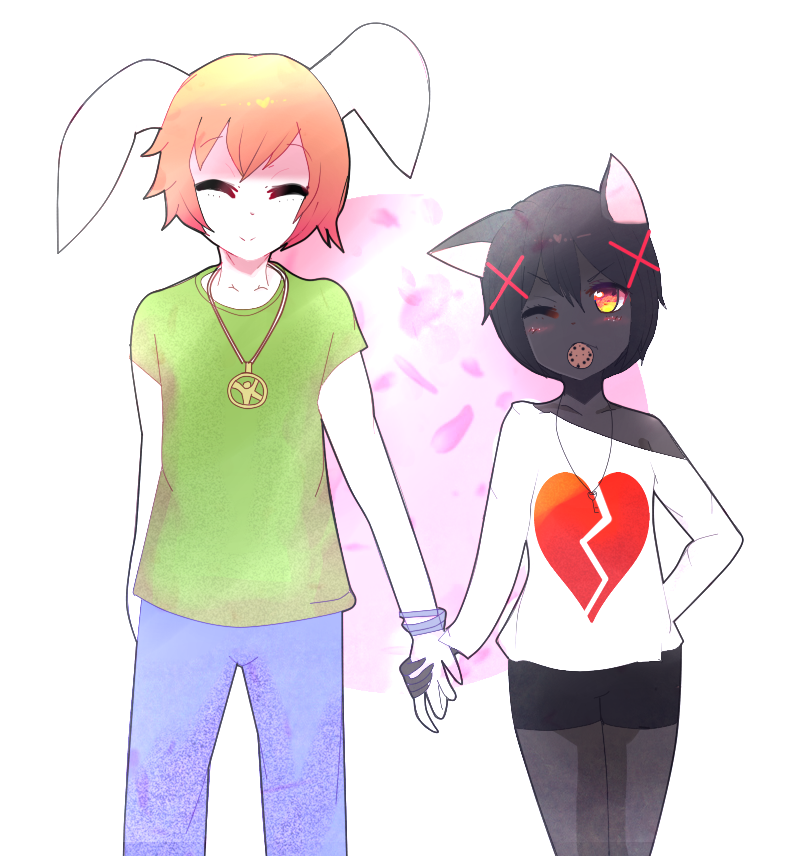 Here is the original Commission Sheet that I had luckily saved on my phone since she edited the submission with a different advertisement graphic on her page.. I feel a bit guilty complaining about detailing so I asked for some of my other friends' opinions but they agreed that what I received was more akin to that of the "Chibi Commission" description as opposed to what was advertised for "Fullbody Commissions".
• Septmber 11th I finally decided to note her to state that I was expecting a fullbody commission with details and was a bit unhappy with the quality of the picture I recieved.

She noted me back offering to redraw the commission, to which I happily agreed to:

Although I was fine while waiting for my commission,  I decided to stop by her page out of curiousity as I had not recieved any reply or seen any recent uploads from the artist.
Upon taking a look at her journal from the front page, I noticied that it had recieved a handful of new replies, and I saw that there were several other commissioners who had been having troubles contacting Homecomin.

With no viewable replies to the current users on her journal trying to contact her, I saw that she had replied recently to a few new inquiries about icon commissions, asking users to note her.

• October 23rd A bit nervous now, I decided to note Homecomin for an update

I waited with no reply.

• October 28th I see a submission on the front page with a familiar style. The account is somewhat new, but I feel that the style is an 80% visual match with that of the Artist Homecomin. The user is advertising Chibi Commissions, so feeling a need for confirmation about thier identity I inquire about a commission and ask for the Paypal address to send payment to, using an alternate account.

[I was asked by a Mod to edit out all instances of Homecomin's paypal address and email address due to her being a minor.]
As I had suspected, the Paypal address is a direct match to one of the e-mail addresses belonging to Homecomin.
Having confirmed thier identity on this new account, I decided to leave a shout on thier page using my main account:

The Page Shout was swiftly deleted off the front page and I received a note:

Needless to say, I did not really believe her excuses [especially when I spoke to another user awaiting a commission from her who said they had received  no reply/news on thier commission nor notfication of the move to the new account] but I replied anyway stating that I would like a refund unless she really believes she finish my commission.

I decided to wait a few days before posting up an A_B as a last resort so at least I may warn others of this Artist... But then I saw that she is currently trying to sell over on Weasyl and decided that I should post this up ASAP..

I hope I did everything correctly. Please let me know if I have made any mistakes as this is my first [and I hope only time] I have ever posted an A_B. I highly believe that this Artist is going to continue Art Site/Account hopping, as well as now it seems as though she is trying to hide from being found by asking people to note her for Paypal Address for payment.


UPDATE 11/08/11:
After I left a new Page Shout on her page, she has sent me a new note claiming that she had sent me notes regarding my commission and that FA's note system is glitching up once more.

In this new note she claims that Naho and the other alt FA accounts do not belong to her and that she has "faced situations where people have posed" as her.
Granted that, pushing aside the fact that these accounts have all been confirmed via Paypal Address, I can't seem to fathom why someone would make an account to Impersonate another yet while still keeping the Impersonated Party's Paypal Addresss????

[In short, Why would you impersonate someone just give them payments???]

But I digress. Here is some proof:

Here is a Submission posted on one of the "Imposter" accounts on October 20th, 2014. 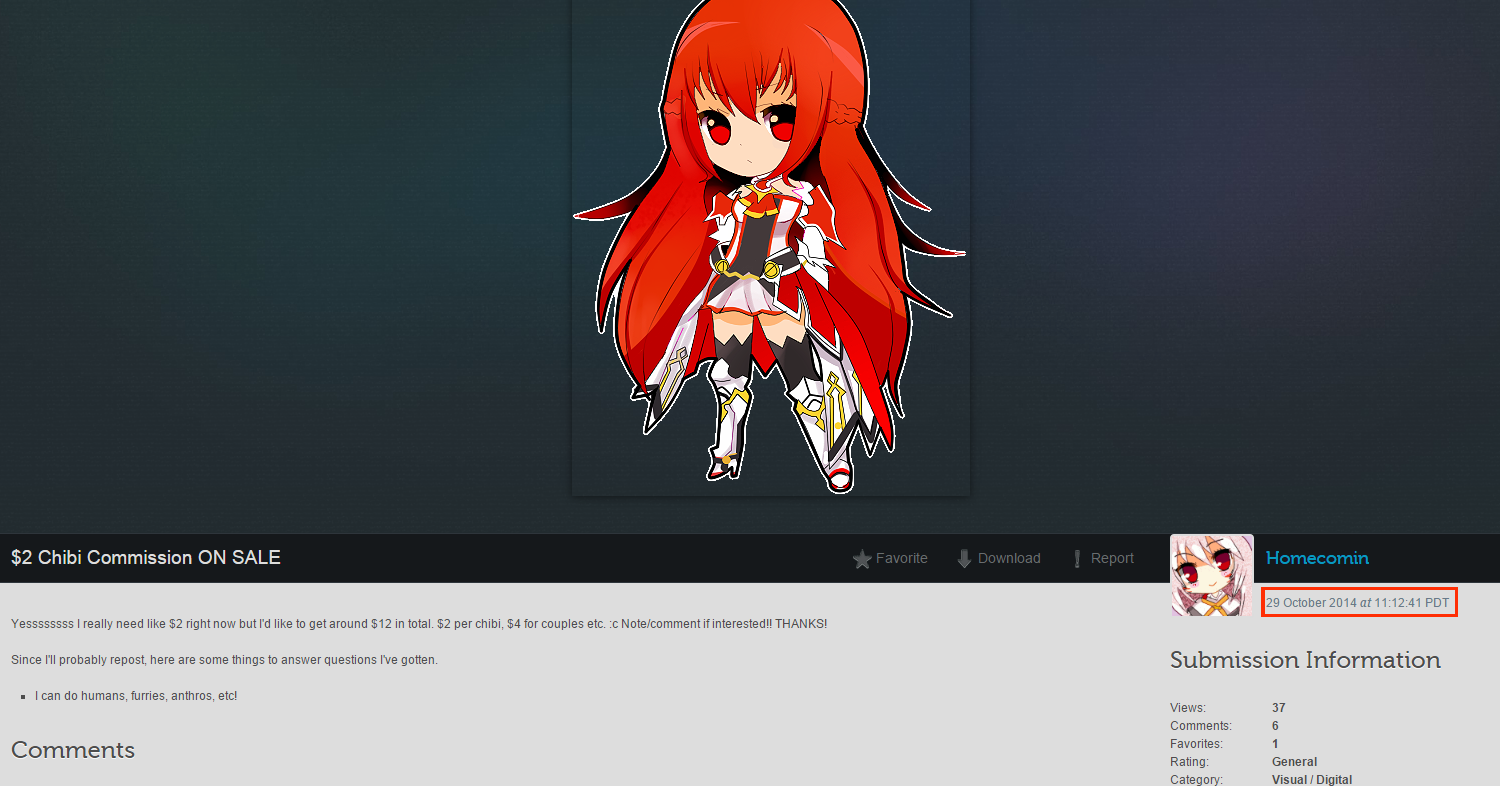 Here is the same Image posted to Homecomin's Weasyl on the 29th of October.
I am not sure how an imposter would have an image of yours posted before you did, yourself..?
I know FA's Timestamps can mess up sometimes but in my experience, they usually deviate by a single day, certainly not nine.

EDIT: After exchanging a few more notes, I was partially refunded my Commission payment [which I had suggested as I did technically receive a picture].

EDIT 5/29/15: I believe that I have come across this user once again on two new alternate accounts where the artist has a pretty close style match and the age is consistent. I am currently investigating.

EDIT 8/13/16: They are under a new Alias and are taking Commissions again. Please be wary:
http://www.furaffinity.net/user/awri/
Tags: artist-homecomin/naho, beware
Subscribe