WHEN: Ordered and paid in March.

My reply to hers 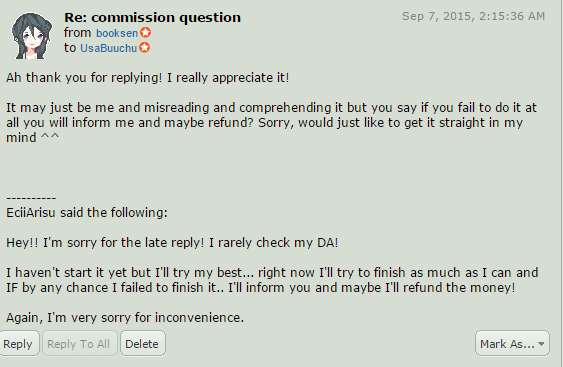 No response to my last reply, sent another message October 7th

EXPLAIN: In March of this year I purchased a fullbody couple from Usabuuchu (formerly EciiArisu) on deviantart. After paying I waited some months until July when I asked for a update on my commission. I didn’t get a reply so Auguest 30th I sent another note asking the same thing. I finally did recieve a reply for this one on September 7th.

The reply had me a little worried as it was worded. To me it made me think ‘i might finish your commission and if I don’t then maybe you get a refund’. I sent a note as soon as I read this asking for clarification but have not heard back since. I have sent another note as of last week, October 7th , and still haven’t heard anything even though the icon on the note says it has been read. They are still active on other sites and on dA (uploading art, commenting, etc).

I do not want to cause any trouble or drama but I felt this needed to be put out there. Thank you for your time in reading this. I would also like to apologize for any spelling errors or mistake, this is my first time posting to artist-beware.
Collapse