*I piled up all the screenshots in a album on Imgur, link is below. Boyfriend's name is also crossed out. http://imgur.com/1BKBQ5T&3DQRFvM&O80ZcBt&IS8zZB5&vYbDbfB&bxmc9ii#0
*Picture 3 and 4 are switched around. Sorry to confuse!

Explain: Bandicoot is a local-ish fur that is on our state fur group. In February she posted a few pictures of her felt badges done for other local furs in the group. I got a liking to them and asked for two, for my boyfriend and I. Paid the same day and was told they would be finished within 2-3 days. I sent over a private message for an update and was told they were mostly finished.

We had a fursuit build party coming around, which was perfect for her to bring them by instead of mailing them. Came to the party and I can't remember the reason she didn't bring them. No biggie. She said they would be shipped to me when she got home. After that, no further contact.

Around the 25th of August a couple of friends of mine drove up to meet with Bandicoot to visit and other personal reasons. Again, I asked about my badges and given another explanation of them being misplaced in her home. A bit annoyed but brushed it off and said okay and asked to keep me updated if they turned up somewhere.

Update:
This was the last reply I got and no response since, during all that she has been online and posting freely. Why is it so hard to mail them to me? I have not asked for a refund due them being completed, yet no proof that they are. Just have that bit of hope to them being done as she stated. 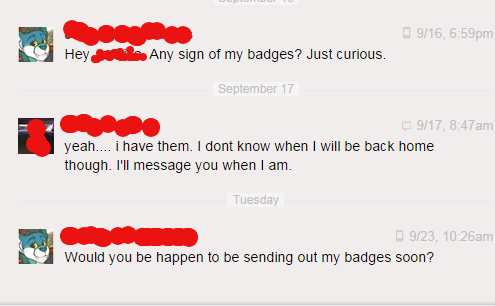 Update: 10/9/14 That was the last time she contacted back than unfriend my from FB. She has ignored others whom she owes to boot. So I'll be counting this as a loss.
http://imgur.com/CmpPRHx

Do not commission this artist. You'll receive every excuse in the book and no product.

I just got an email today that Paypal is going to be updating its policies, and I noticed two things will significantly help people who use Paypal for commissions stay protected! I figured this would be a good place to share just in case not everybody gets those emails. :)

And from their highlist post in my email for those who want a shorter version:

"And last but not least, you'll see some updates to our User Agreement that go into effect November 18, 2014. If you're interested in all the details, take a look at our Policy Updates Page. Here are the highlights:
• We're increasing the time for buyers to file merchandise disputes (Item Not Received and Significantly Not as Described) from 45 days to 180 days.
• We're extending buyer protection to include item not received claims for custom made products.
• Because PayPal Seller Protection and Buyer Protection policies may vary from country to country, we're adding language to clarify which country's policy applies when a seller makes a sale to a buyer outside of the U.S.
If you use PayPal after the date these changes become effective, we will take that usage as your consent to the changed terms.
Feel free to contact us with questions through the Contact link at the bottom of any page.
Sincerely,
The PayPal Privacy and Compliance Team"
Collapse