A lack of communication on several commissions and zero updates on said pieces. Worst of all, even the artist forgetting I had commissioned them altogether. Most details about the commission agreements were exchanged verbally and in-person because this artist was living with us as a roommate. However, I do have screenshots of the monetary transactions that took place, detailed emails sent to the artist showing the date, and notes from other third-parties that had paid AMWULF to join me in group-commissions.

I recently contacted AMWULF on September 16, 2014 to request a full refund on all pieces owed. I received a series of angry text messages and excuses as well as no concrete dates or payment plans except, and I quote, "will pay it back in chunks”. Overall, his behavior can be summed up as unprofessional, condescending, and immature.

The following is a sample of screenshots showing my unfortunate interactions with AMWULF, starting with a typical text conversation, filled with his usual unprofessional, vulgar attitude: 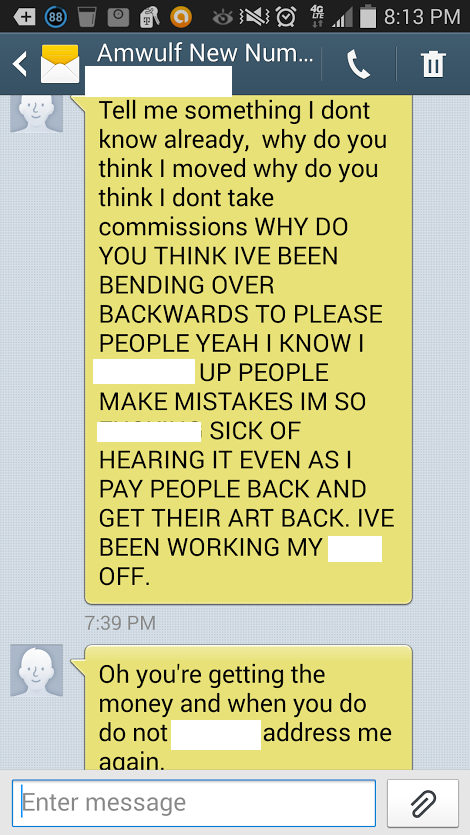 WHO: He goes by the name AMWULF on Fur Affinity

I would advise any person seeking art by an artist to look elsewhere lest they find themselves in a similar situation.

So, some back story.

Back in 2007, I doodled up the following image and tossed it onto my deviantArt account: http://shaydethelemur.deviantart.com/art/Tribal-bunny-67417627

So, imagine my surprise to see a photo posted by an acquaintance that shows said acquaintance has my rabbit design as a tattoo.

Now, a tiny bit of digging on Google Images shows that there's a few 'free' tattoo sites, along with sites like Pinterest, that have reposts of the image in question.

While I'm certainly annoyed, I'm not sure that I'm annoyed enough or attached enough to the image to want to go through all the fuss and bother of tracking down every instance of it being reposted and DCMA every one of them. That being said, I also don't want to necessarily go through this experience again - while yes, it is a bit flattering to see how popular my crummy little doodle has become on the interwebs, it's still hard not to be a bit irked to see it everywhere when I didn't consent (and it even states on the original image post on dA that written consent from me is needed to futz with the image).

So, the question - in your (general) personal experiences, what is generally the best method for protecting one's IP from this kind of thing? Watermarks seem the obvious answer, but I'm wondering if there are other methods folks have tried that have been successful. Also, as an aside, for those that have had their work re-appropriated without permission, how difficult is it to get these kinds of reposts taken down (or at least given proper credit)?

UPDATE: The person with the image as a tattoo has said that her artist apparently PAID for my image as a stencil, which I've told her that I am greatly upset by, since I didn't give any consent to have other people making a profit off of MY work.

For the now, I've emailed four tattoo shops in her area of the globe asking for help tracking down who might have paid for my IP without my okay. I've also gotten screenshots of her tattoo (which she has displayed quite prominently on a social media account) and, depending on her response to my query about the artist, may contact the site to have their caretaker staff remove the photos.

This begs the follow-up question - how in the blue blazes do I tackle this issue now? I was set to look at this as a social experiement, but now that I know someone's paid money for my work as a tattoo stencil, I'm no longer amused.
Collapse